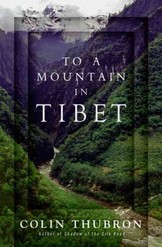 To A Mountain In Tibet - By Colin Thubron

Published by Chatto & Windus
ISBN 978-0-701-18379-0
Colin Thubron, one of a dwindling band of great travel writers, has written a number of discerning and poetic books on the Middle East, Asia, Siberia and the Silk Road. In this book he is travelling to Mount Kailas one of the world’s most sacred places. This mountain since time immemorial has been a place of pilgrimage for the ancient B’on religion that was here long before the Hindus and Buddhists recognised its symbolic power. Isolated in the North West Himalaya on the arid Tibetan plateau it is a peak wreathed in legends, racked by temperamental weather systems and ravaged by storms.
He is asked by Iswor one of his two porters
‘Why are you doing this, travelling alone?’
Thubron cannot answer but writes;
“I am doing this on account of the dead.”
“Sometimes journeys begin long before their first step is taken. Mine, without knowing, starts not long ago, in a hospital ward, as the last of my family dies. There is nothing strange in this, the state of being alone. I need to leave a sign of their passage………..So you choose somewhere meaningful on the earth’s surface, as if planning a secular pilgrimage. Yet the meaning is not your own. You go on a journey walking to a place beyond your own history, to the sound of the river flowing the other way. In the end you come to rest at a mountain that is holy to others.
The reason for this is beyond articulation. A journey is not a cure. It brings an illusion only, of change, and at best becomes a spartan comfort. To ask of a journey Why? is to hear only my own silence.”
The small party of travellers pass through the remote poverty stricken villages of North West Nepal towards the Tibetan plateau. Dreams of the writer’s dead father are prompted by the thinning air and the snapping of  prayer flags on the high passes as they send their prayers scything away on the freezing wind ‘Om mani padme om.’
The Englishman is touched by the deep devotion of Iswor who whenever they reach a pass with its prayer flags and cairns of stones circles them clockwise encouraging his companion to follow him. These are small rituals to appease the gods of the place, a way of remaining in harmony with the unpredictable earth, water and sky. Thubron is reflective and observant quietly empathising with travellers  villagers and monks he meets along the way.  Of one young monk he has been conversing with he writes:
‘He is less than half my age, yet his surety is grand and a little mysterious. But I belong helplessly to another culture. He is focussed on spiritual continuance, while I am overborne by individual death. What is it, I ask, that survives to be reincarnated?’
Crossing the border into Tibet they are faced by the oppression of China’s intrusion into the ancient landscape. There are numerous baggage searches, suspicious military everywhere.  Above them loom the ruins of the once great monastery of Shepeling destroyed by Chinese artillery in 1967 its vast, priceless library of texts cast to the winds and fire.
Ascending to 16,000 feet at last they catch sight of the south face of Mount Kailas as it shines out across the lakes and the arid deserted plateau. Lake Manasarovar is the highest freshwater lake of its size on earth and Hindus believe it was created by the mind of god and is the flower of first consciousness, here the sepent king taught enlightenment to his water spirits and the Buddha’s mother bathed before receiving him into her womb.  It is also related that Śākyamuni Buddha and 500 of his disciples flew in on their way to visit Kailas! The water, the air, the very rocks themselves seem impregnated with the supernatural, the mysterious, the ethereal. For centuries hermits have meditated here in caves whilst the broken monasteries sheltered those few monks who could endure the thin air, the lunar landscape, the freezing winds and storms.
The  physical rigours of the pilgrimage and this strange landscape disorient Thubron, he is constantly assailed by the death of his mother and distant memories of his father and a sister who died tragically young in the Alps. As they draw closer to Kailas the mountain’s strange presence intensifies and is surreally contrasted to the Chinese bureaucracy as it demands permits and visas. The party is now joined by crowds of pilgrims all intent on making the ‘kora,’ the traditional clockwise circambulation of the mountain. Those few travellers from the ancient B’on religion that was old when Buddhism came to this part of the world determinedly go anticlockwise against the flow. ‘After all,’ they say before Buddhism came this was ‘our’ mountain! The ‘new’ faith as it came to this region absorbed many of the Bo’n rites, rituals, spirits and gods. Even today there is little hint of western thought  or rationale here. The kora reaches its zenith at 18,600 ft. where even the Tibetan pilgrims  suffer in the thin freezing air and the bitter mountain winds.  As he had promised Thubron lights an incense stick for a Tibetan friend in Kathmandu  and then descends to the valley soft in the evening sun. As he walks he feels the cool winds off the mountain  at his back and imagines he hears the eternal prayer ‘om mani padme om,’ ‘praise to the jewel in the lotus.’ singing in the breeze.

Back to front page