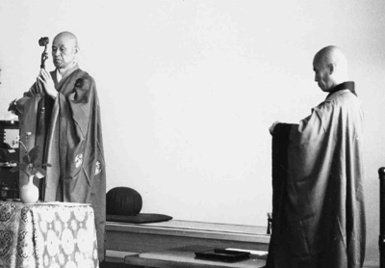 This issue of Mountain Silence makes offerings on form and ritual in Zen. In the service of this, we have a talk by Roshi Reb Anderson, kindly transcribed by Frances highlighting the Bodhisattva initiation ceremony as a wonderful example of the essential quality of form to practice.  Gill Jackman offers a view of form that liberates us from fundamentalism and Hilary reports from the wonderful retreat at Unstone Grange.

We have some unique events in the calendar now, with Catherine visiting and leading a number of retreats and workshops up and down the country, culminating in a long Rohatsu retreat lead by Ingen Breen from the 30th November to the 8th December (only one or two places left!) and some sewing support in Little Budworth!

We'd like to invite interest from people willing to transcribe audio talks for publication in this newsletter (and maybe even a book one day?).  This is a great practice that really helps you to become intimate with the teaching.  Email us if this is of interest to you.

This afternoon we are planning to have a ceremony. It’s an initiation ceremony for entering into the path of a Bodhisattva. A bodhis... Read more

Form and Ritual in Zen

I find it very interesting that many people are put off by the rituals of Zen.  Apart, of course, from the bowing and the prostration... Read more

The Unstone Grange retreat held from 3rd-7th August this summer felt like a very special event, like the moment a fledgling succeeds in taking flight for the first tim... Read more


Form and Ritual in Zen

Next Issue
The autunm edition will have a theme around mindful communication. We welcome your articles, poetry, pictures, letters, retreat reflections and book reviews! Publication date: 21st December, deadline for submission of material 1st December.

The practice of being a Work in Progress. Inside and Outside

The Teachings of Enlightenment & the Things of the World

Awakening to our True Body

October Zen in the Sun

A Retreat with Ingen Breen in Greece.

There will options of shared and single rooms. Payment can be in installments for this event. Still finalising details, but do contact for information.

A Weekend of Zen

A week retreat over Samhain

A weekend of Zen in Somerset

A weekend of support for local group facilitators

7 days of practice with Ingen Breen

A one day practice with the Brighton Sangha